On the Double Positive

Onechan (five in late December) and imoto (two-and-a-half today!) were building a room for their dolls in the play room in our house this past weekend, complete with bunk bed (a kids' bench, turned upside down), pillows, blankets, and all the necessary accessories: a plate filled with small change for snacks, a bucket of golf balls (some real) for entertainment, a shovel, and an assortment of other doll-appropriate toys. I was grading in another room, while the Full Metal Archivist was doing homework in still another one. Because mine was closer to the play room, onechan kept coming in to update me on their progress. The first time I saw their room, I was impressed. I think I even called it "awesome." Perhaps that's why, in an effort to get my attention a few minutes later, onechan deployed the double positive: "Dad, it's more awesomer! Come on!" She may even have reached for the triple positive still later: "It's even more awesomer now!" And indeed it was.
投稿者 The Constructivist 時刻: 5:18 PM No comments:

Ah, the wonders of teh internets! Not to mention the kindness of strangers and the generosity of friends! Since I last wrote on a possible Hawthorne/Izumi connection--Izumi perhaps using the crisis of faith and epistemology in "Young Goodman Brown" to add some interesting resonances to his meditation on dreams and reality, life and death in "One Day in Spring"--I've heard back from Charles Shiro Inouye and Susan Napier at Tufts and my friend Koichi Fujino at Seinan Gakuin University in Fukuoka. The bottom line: there's no definitive evidence either way on whether Izumi could have read "Young Goodman Brown" before 1906. In fact, they know of no work in English or Japanese that takes on the question directly.

The Full Metal Archivist approached the question from an oblique angle that may well prove to be helpful. She noted that Izumi's mentor--おざき こうよう Kouyou Ozaki--read a good deal of literature in English and was a huge influence on Izumi in his literary and wider life. So it's possible that Izumi heard about "Young Goodman Brown" from his mentor. Another line of research to pursue.

What makes this very specific empirical question of perhaps wider interest is that it points to a more general problem: when an intertextual reading isolates structural homologies, what ought we to do with them? I speculated with my students in class Friday on any number of directions we might go in to pursue everything from the meaning and significance to the implications and stakes of the structural homologies, should they actually turn out to be intentional allusions on Izumi's part. Clarifying the conditions of possibility for an actual case of translinguistic/transcultural influence/revision can do more than establish a factual base for an interpretive reading; it can also help reveal pathways for transnational communication at the turn into the 20th century.
投稿者 The Constructivist 時刻: 12:00 AM No comments:

Brother, Can You Spare 15 Minutes?

To help out some NYU researchers by filling out their survey? And post the link (with comments closed) on your blog? Please don't do anything to bias the survey results...thanks!
投稿者 The Constructivist 時刻: 12:00 AM

Jessica Kalny (words) and Mike Wayman (photos), two students from my Intro to Grad Studies in English seminar this semester, collaborated on the following report.

On October 7, 2008, a man named “Jim” obtained permission to enter campus for the day. He has been visiting several SUNY campuses to spread his message. However, it is not the kind of message that one would want to pass on to the next generation. His message was one of intolerance, particularly against the “typical college lifestyle” and homosexuals. 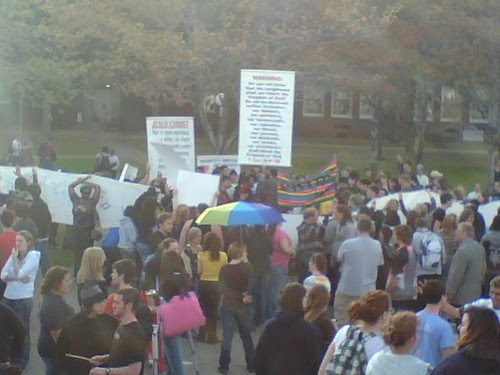 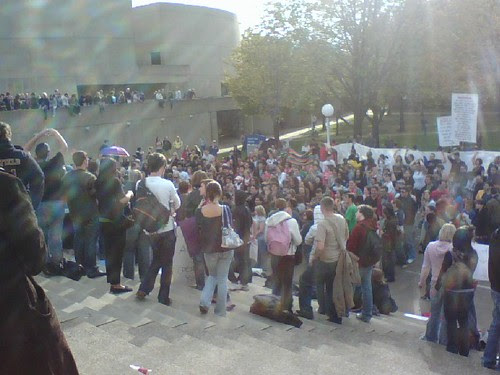 Having been there, I can tell you that it was an extremely powerful scene. To see so many peers coming together to prove that intolerance is not acceptable. We did not show any disrespect towards Jim, and I’m sure that he expected us to. As a campus, we wanted to show him that it is not right under any circumstance to discriminate against any group of individuals.

After a number of students spoke their minds about this topic, the percussion guild showed their support by playing several songs which many of the students danced along to. I can honestly say that this protest made me proud to be a part of such a tolerant campus community.

For more on the spontaneous protests, check out coverage in the local newspaper. Here's one of the many youtube clips that went up soon after the protests:

[Update 1 (10/30/08, 8:11 pm): My old sparring partner The Objectivist sees the protestors as the agents of intolerance here. And there's a vigorous debate on the faculty listserv I may comment on later.]
投稿者 The Constructivist 時刻: 12:51 PM 2 comments:

Waiting for the day when I can research the following topic in the middle of the night from the comforts of home to my satisfaction: could Kyoka Izumi have been consciously alluding to Hawthorne's "Young Goodman Brown" at the end of the first part of "One Day in Spring" (1906)? The answer is most likely "no." Not only does the standard list of conscious Japanese Hawthorne-alluders start in 1908 (with the exception of one 1887 novel by Kososhi Miyazaki), but Izumi would also most likely had to have read Hawthorne's tale in English, as it wasn't a favorite of his early Japanese translators. Still, there are enough textual (journey into woods, bizarre encounters, possible dream, chilling effects) and generic (gothic, fantastic, romanticism) parallels to warrant further investigation. Charles Shiro Inouye mentions in his critical biography The Similitude of Blossoms that Izumi read Hawthorne's Peter Parley's Universal History, so it's at least possible he could have read Hawthorne's short stories before 1906. Looks like I'll also be interlibrary-loaning Susan Napier's The Fantastic in Modern Japanese Literature.

When I get onto campus in a few hours, it'll be a nice break from grading to check out the MLA Bibliography and email Inouye and Napier. I'll let you all know what I dig up.
投稿者 The Constructivist 時刻: 4:30 AM No comments:

I introduced you all to my colleague Aimee Nezhukumatathil awhile ago, so I'm sure you'll be pleased to find out how she turns close reading into an interdisciplinary art form in a brilliant response to Linda Pastan's poem "The Deathwatch Beetle" that ranges from Poe's "The Tell-Tale Heart" to entomology, from word choice and sound to bodies and spirits.
投稿者 The Constructivist 時刻: 4:48 PM No comments:

Just a quick note to publicly acknowledge the utter awesomeness of Rob MacDougall and Marc Bousquet. Rob and his family drove much farther than I assumed they had to in order to meet the Constructivist clan at the Canadian Falls late this summer, while Marc put up with the perils of a skype-mediated conference call with my 11 students in Introduction to Graduate Studies in English yesterday afternoon (his time) in order to answer our questions on his book How the University Works.

We actually pushed the call with Marc back an hour later than planned because I had given my students the option of witnessing/documenting the largest campus/community protest I've ever heard of at my university--actually, an impromptu counter-protest, complete with speeches, musical performances, and skits against an anti-gay nutjob individual with full free speech rights whose point of view the more-than-2,000 people over the course of the afternoon respectfully but firmly declined to assent to--and three-quarters of tbe class took me up on my offer of extra credit to respond to it on our ANGEL discussion forum and perhaps more publicly. I'd like to think our campus made one transplanted western NYer proud. And I'm hoping at least some of my students make good use of the temporary privileges of Citizen SE authorship I've extended them. Stay tuned!

For those clickers from Inside Higher Ed checking out the obscurest blog on teh internets for the first time, please do pay a visit to Rob's and Marc's sites. Their writing, their voices, their scholarship, and their generosity make the academo-critical blogdustrial complex a better virtual space.
投稿者 The Constructivist 時刻: 3:40 AM No comments:

What Department Listservs Are For

I know, Scott is great at explaining how not to use 'em. But how about some examples of best practices?

Like one colleague of mine linking to this. Which provokes this:

Rocket ships
Are exciting
But so are roses
On a birthday

Computers are exciting
But so is a sunset

And logic
Will never replace
Love

And this. And that.

If you can top this exchange (or simply name the poet I quoted), I'd see that we hired you in a heartbeat. If it weren't for that pesky $4.2M shortfall and hiring freeze we're muddling through right now....

Anyway, do leave a link or report on a good exchange on your department listserv. Berube shouldn't get all the best commenters.
投稿者 The Constructivist 時刻: 5:01 PM No comments:

CitizenSE started out as a place to clear my throat and free associate my way through parts of several apparently neverending research projects while on a teaching Fulbright in Japan and became an academic/family life blog upon my return to the States, until it morphed into an academic governance blog during the year I chaired Fredonia's University Senate. Someday soon it may once again become "chiefly about Hawthorne matters"--or something else entirely. Feel free to send me suggestions, corrections, complaints, requests, and more at the[underscore]constructivist18[at]yahoo[dot]com.

Who links to me?

This work is licensed under a Creative Commons Attribution-NonCommercial-ShareAlike 2.5 License.